we love you all but farmers don't have time for blogs in the season...especially farmers with a 2 year old and a 3 month old....so here's some pictures :)

The spring has finally arrive with the end of March. In part because of the weather and in part because we have been blessed with a second child, we have been feeling a little behind with the start of the gardening, but we are starting to manage. Bed preparation continues apace, and the first transplants are going in the ground over the next few days. Currently, spinach, beets, carrots and peas have been planted, and we have two types of lettuce, kale and red cabbage on deck.


We have also been busting our humps trying to finish a small greenhouse in time for the warmer weather, and the frame is coming along bit by bit. The structure has certainly proven to be a puzzle with many different components, but no pieces have gone missing yet . . .

To use Shirley Hampshire's expression, the firm took on another junior partner on Monday, March 25th, when Rowan Marion Leadley joined the rest of the team. The birth interrupted our weekly routine a tiny bit, but with the help of Carolyn's parents, we have somehow made it through our first week as the parents of multiple children. He has already been a huge blessing, and his older brother is quite fond of him.

We have had many customers ask about future availability of popcorn shoots, and i am pleased to report that we have found what looks a reliable supplier for organic seed. We have a couple of trays timed to be ready for the market on Saturday, April 13th and with any luck, we will continue to make them available on a weekly basis. Sweet!

Like many other organisms, helianthus annuus is occasionally prone to albinism. Due to the volume of our operation at this point and the sheer number of sprouted helianthus seeds, we notice albino shoots every so often among the trays. This past week, I finally got around to pricking one out to grow to maturity (as we had extra room on one of the trays of curly kale), as I have been curious for a while what the mature plant might look like. Rest assured, if it has a unique appearance fully grown, you may expect a follow-up picture. 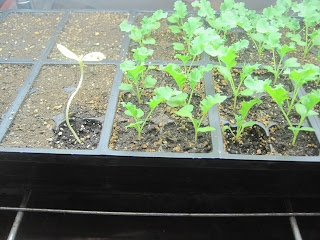 Much has taken place with the farm project since the end of last season. After continuing to harvest some field crops into the beginning of November, we have kept up weekly shoot production through the off-season with only a short break for the end-of-year holidays. As is plain from the above photo, we are still a little while removed from doing much outdoors, although the sweet onion transplants for the spring are already in trays.


On the request of our friend and customer Phil Jones at Colors in Harmonie Park, we have also recently tried our hand at growing popcorn shoots. We dropped off some 7-day-old shoots at the restaurant, though they did not look as developed as the packaged shoots in online photos. Right now, they look like pale yellow spikes, but will apparently develop blades somewhat wider than wheatgrass blades. Most recipes that I have found on the internet assume that the corn shoots have been blanched during the sprouting process, which is what we have been doing.


Because we have only planted about half of one tray, the current plan is to bring samples of this crop to Eastern Market this Saturday (2/16/13) and see where customer sentiment goes from there. We also need to figure out how many days each planting would require. 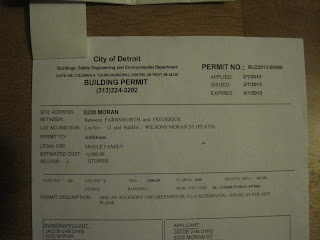 The long march toward an improved growing space took a major leap forward at the beginning of February with the acquisition of a City of Detroit Building Permit for a greenhouse. At the conclusion of two bewildering afternoons spent at the Coleman A. Young Municipal Center, we emerged one permit fee lighter, but with a shining piece of paper allowing us to break ground. Our hope is to start construction as soon as the frost is off the ground this spring.

This next section is dedicated to my brother William and his wife Rebecca, without whose generosity our progress in this regard would not have been possible.

When we started coming to Eastern Market after the start of the year, I got into a habit almost by accident that has since yielded some useful statistical information. Desperate to find some alternative to constantly checking my cell phone for the time (it is quite handy to always know what time it is during the Saturday markets), I began bringing the elegant timepiece I received from my brother for being a groomsman at his wedding and keeping it on the table. Almost immediately, the instantaneous access to the current time strongly appealed to me, and I certainly didn't mind being able to stow my cell phone until the end of market.


During the first Saturday I brought it with me, it occurred to me--since it was much easier to keep track of the passing of each hour--to mark when the tops of the hours took place in the course of tallying sales of each crop. Doing so, I realized, would allow us to see how busy we were through the Saturday market. As long as each hour was noted in its place in the tally row, we would end up with a tidy record of hourly sales.

I will be the first to admit that our hand-kept tallying system is highly imperfect to begin with, and only effectively records about 90% of each week's sales even without marking the hours. On the other hand, sales in January and February are much easier to track with any degree of accuracy, both because of their relative infrequency during the market day and the lack of crop diversity in the off-season.

The above graph shows an average of the hourly sales volumes over the most recent five weeks at Eastern Market. These data seem to suggest that most folks show up for their sunflower and pea shoots around lunchtime, but I am excited to see what this bell curve does during the season. My hypothesis involves a general shift to the left (that is, toward the earlier end of the market day), but time will tell.

Thank you again, William, for enabling the preceding interpretive analysis with your thoughtful gift. Carolyn and I wish both of you the best possible luck with everything!
Posted by jacob at 11:54 PM No comments:

Spring Wrapped Up, On to Summer!

Wow!  so much has happen since my last post, its hard to know where to start.  We we are officially done with Spring!  And by Spring I mean the season in which I work 12 hour days to get all the beds prepped and planted and begin to enjoy our first delicious harvests of Detroit produce.  It was a crazy one.  We unfortunately had some personnel turn over right in the middle of the peak field work period (end of May), when we had 10 90 foot beds to work up and get planted.  But thanks to friends and family who were able to put in a little extra Finn-care time I was able to bust my butt and get it all done.  Of course now that all the real work is over I have more then enough help, as Joan has returned from South America (good stories, you should ask her about it) to join the Rising Pheasant Farms team again and we have brought on Russell for some additional assistance.  So the farm is really looking great right now and I'm nervous about running out of things for us all to do (probably won't happen but now I don't feel bad about taking Monday's off...well from field work at least).

Snapshot of the farm harvest currently: scallions, garlic scapes, broccoli, cabbage (we grew them mini, and folks seem to really like that), collards, red russian kale and curly kale, swiss chard, spinach, and peas.  A few of these spring vegetables are on their way out (we'll have more head lettuce, spinach and peas in the fall!), but just in time for our favorite summer vegetable to begin to produce.

We also planted a bunch of perennials which we will not be able to harvest at all this year.  Raspberries, blackberries, asparagus, and strawberries all went in and I can't wait till next year when I'm harvesting all that goodness.  With the complete devastation of Michigan fruiting crops it has reaffirmed my desire to grow my own berries (gotta use that heat-island effect for something positive).  Plus with out the recent crops losses, it has generally been difficult to come across organic/no spray berries at Eastern Market or even near by upick.  I used to just ignore that fact but with a small child and the unfortunate knowledge (some times a curse) that berries absorb more pesticides and herbcides then really any other type of produce, I just can't bring myself to purchase/consume conventional berries.  And I LOVE them so much...its really aweful.  But next year we will have more strawberries, raspberries and blackberries then we'll know what to do with!!  It will be interesting to see if any of them make it to market.

Infrastructure wise, we're still plugging a way on the fence (and making plans for fencing in the side yard) and we've finally finished demo on the farmhouse!  This past weekend we actually put something IN the house (besides blood, sweat and tears).  My neighbor Mike, who is a carpenter, assisted us in building and placing a 16 foot beam down the center of the house so we could remove a support wall and expand the kitchen.  It looks awesome and only took one days work (after a year of demo, it is unbelieveable that any thing could be accomplished in a day).  The next project is replacing the stairs in the center of the house (taken out when it was converted to a 2 flat).

We've also started our weekly farm stand.  We've put up our stand 3 times now and seen some decent neighborhood traffic, including meeting at least 5 new neighbors.  And since that's really the whole point of the stand, besides increasing access to fresh produce, I'd say we're doing pretty well.  The farm stand will probably never be a big money maker (hard to beat Eastern Market) but I think it will serve very well as a neighborhood gathering spot and mini food hub.

Well I'm sure I'm forgetting a whole bunch of exciting updates, but its time to get out to the field so I'll leave you with some photos from the spring!

A family-owned farm on Detroit's Eastside. We specialize in naturally-grown microgreens and a wide variety of heirloom vegetable crops all delivered to local markets and restaurants by bicycle!